Montessori principles propagate that a child's brain develops the most from the time of birth up to three years of age. It was this principle that Vasanth Tamilselvan and his Montessori teacher wife Nisha Ramasamy followed to develop toys for their newborn daughter in 2016. "My daughter was born with atopic dermatitis. We decided to make toys with a natural material like wood so that it didn't affect her skin," says Vasanth. And that is what they did! After hiring a local carpenter, who was given very specific instructions on how the toys should look, Vasanth and Nisha developed a bunch of wooden toys for their daughter. "When some of my friends came over and expressed interest, we realised that such toys were not available in India. The ones available abroad were quite expensive. We understood that there was a huge gap in wooden developmental toys in the 0-3 years age group," says Vasanth. A couple of years later, he and his wife founded Ariro Toys.

Based in Chennai, Ariro Toys is now shipping across the country. "The toys have been developed after consulting with Montessori teachers. They are simple and nurture sensory and cross-motor skills in the child's formative years," says Vasanth. The duo is now developing everything from teethers and rattles to exquisite mobiles. They have also ventured into larger toys like indoor jungle gyms and pikler triangles. An interesting aspect of the toys developed by Ariro is that most of them are made from neem wood. "Whatever a child can put inside their mouth in these formative years has been made out of neem. It was used to clean teeth before and we thought it was perfect material for teethers and other smaller toys. It is also a natural immunity booster," says Vasanth

Before launching Ariro Toys in 2018, Vasanth and Nisha travelled to different parts of the world. "We went to Italy to research Montessori principles and to check what kinds of toys they were using. We later went to Shanghai and also toured Malaysia to search for appropriate toys in the age group," says Vasanth. Even after extensive research, they failed in their first attempt to make these toys in India. And that is when inspiration struck!

While travelling through some villages in South India, the duo stumbled onto some rural artisans. "Rural toymakers in Tamil Nadu, Andhra Pradesh and Karnataka are going out of work due to increasing dependency on Chinese products. When we met them, we realised that they could make the toys we needed, perfectly. After training them a bit about the kind of toys we needed, they could make them easily," explains Vasanth, adding, "All the smaller toys, which is 60 per cent of our product range, is handmade by the rural artisans. The bigger toys are made in a factory near Chennai." 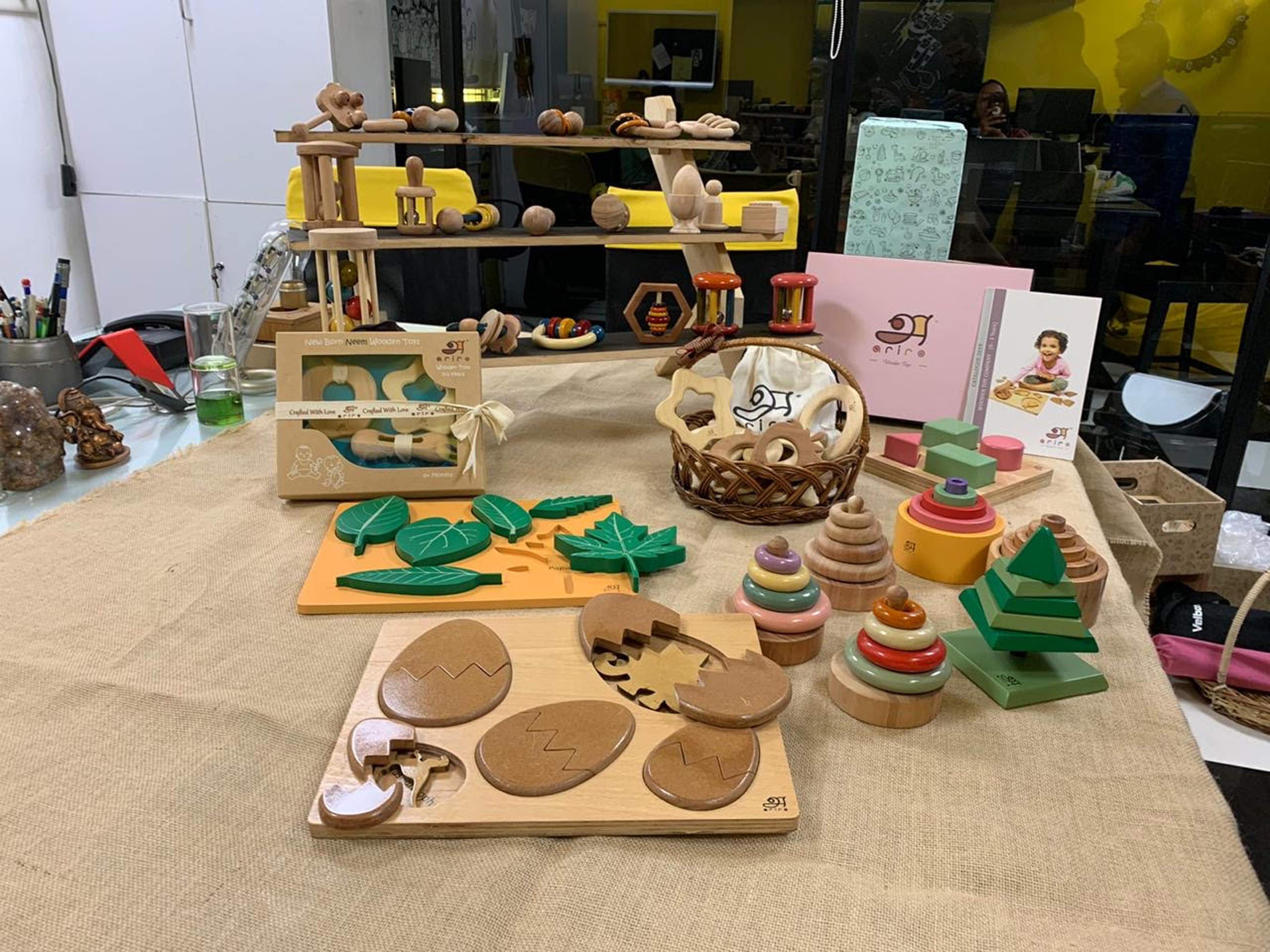 With a team of 12 people now working full-time, Ariro Toys is looking to expand into stores soon. Their first experience centre in Chennai is due to open next month. "We also have several advisers who are part of the development process. From ideating a toy to it being finalised, there are several testing processes involved which takes around three months," says Vasanth. Ariro Toys can be brought from their website and online stores that curate toys and on Amazon and Flipkart.

Back to blog
Toy Stores